One of the Record Dungeons' best features is their pixelated versions of famous FINAL FANTASY scenes. Take a look at this video and see for yourself. Every pixelated graphic here has been newly created just for FFRK!

＊ Please note that this footage is from a version of the game that is still in development, and may differ in some aspects from the final release.
＊ You can watch the video here if you cannot get the embedded one to play.

Tyro and Elarra Set Off into the Corrupted Paintings!

The story of the Record Dungeons is linked to the events that took place in the Hall of Magicite. Together with a newly freed Elarra, Tyro will venture into Record Realms contained within mysterious Corrupted Paintings.

–Story–
Some time after the Hall of Magicite incident, strange new magic has been detected on an island in the far reaches of the kingdom. Tyro, Dr. Mog, and Elarra set out in Cid's airship to investigate. Once they arrive, Elarra hears a voice calling to her, and is drawn away from the airship. Tyro goes after her, and comes across a mysterious Corrupted Painting emitting a strange kind of magic. As he would later discover, these paintings are not like those found in the Royal Archives, which contain only records of battles. Instead, these paintings contain nothing less than records of great legends...

While you don't need to have experienced the Hall of Magicite story in order to enjoy the Record Dungeons, those of you who have played through it will find the Record Dungeons much more interesting. So if you haven't completed the Nightmare yet, now's the time!

Not only are famous scenes from FINAL FANTASY titles getting the full pixel-remake treatment, but Tyro and Elarra will appear in them too! And their appearances won't be limited to the background. They'll also be joining in on the dialogue! This won't change the way the original titles' stories play out, but the heroes and scenes that Tyro and Elarra encounter will definitely have an effect on the two keepers! So not only will you get to experience the stories of famous FINAL FANTASY heroes, you'll also get to watch as Tyro and Elarra grow and change in their own original story! Furthermore, in some scenes, you'll have the chance to make dialogue choices! These choices can open up paths to new dungeons, or have effects on later story developments.

Let's start by going over how Record Dungeons are structured, and the special rules that apply to them. Record Dungeons are organized by chapter, with each chapter taking place on a different island. These islands are reached via airship, and contain multiple dungeons tied to different FINAL FANTASY titles, which in turn contain famous playable episodes from each title. Of course, like FFRK's existing content, more Record Dungeon chapters will be added regularly! Test Your Skill in Battles From the Original Games!

Record Dungeons primarily consist of making your way through Corrupted Paintings, which involve fighting battles with a pre-determined party. Figuring out how to exploit your foes' weaknesses with the party you've been given puts a new twist on FFRK battles! While the initial dungeons should be on the easy side, they become more difficult as you progress, to say nothing of the hidden dungeons that are separate from the main route and contain much greater challenges. While higher difficulties can certainly be intimidating, don't be afraid to give them a shot. After all, every pre-determined party has been designed to give you a fighting chance!

The great thing about Record Dungeon battles is that you don't have to get new abilities or equipment to beat them. The only skills you need to succeed are your own! The Record Dungeons also include a new Movies feature, which offers pixel-art recreations of famous FINAL FANTASY scenes. It's a completely new way to experience memorable events from FINAL FANTASY titles in FFRK! As you explore the Record Dungeons, you'll come across various icons. When you find one, tap it to move to its location--simplicity itself. A system with more freedom to explore would also require more complicated controls. This way, anyone can pick up FFRK and start playing! Of course, no FINAL FANTASY dungeon is complete without hidden treasure chests and secret passages, so don't forget to keep an eye out for those!

Crystal Water: A New Way to Upgrade Your Heroes 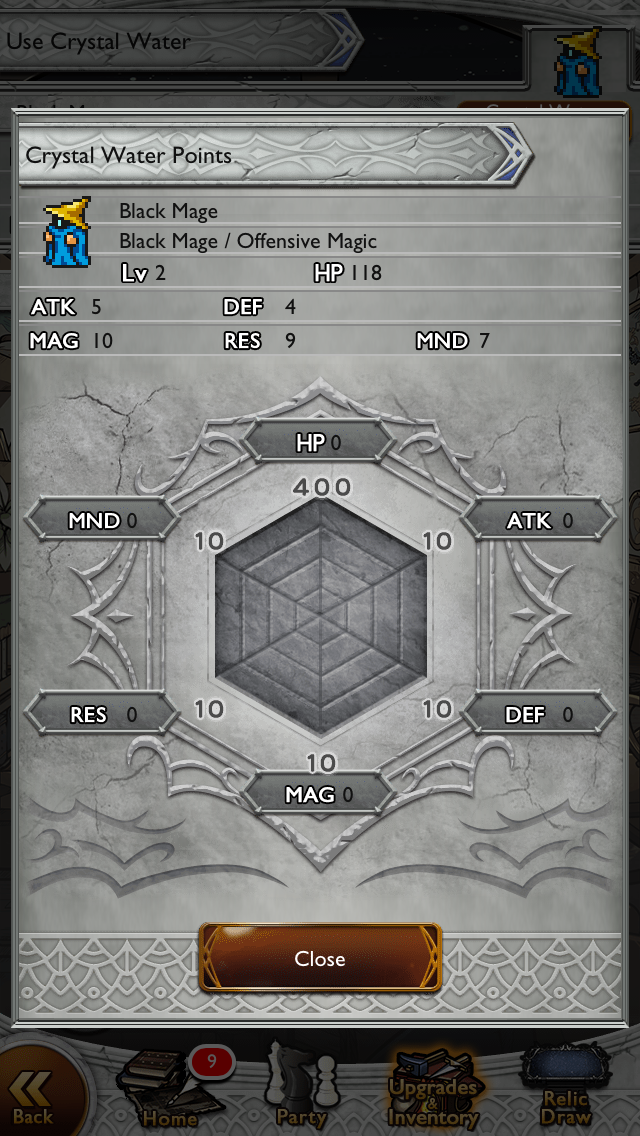 We'll soon be introducing Crystal Water, an all-new way to help your heroes grow even stronger! Different types of Crystal Water correspond to different stats, so to raise a certain stat, you just need the right type of Crystal Water. At first you'll only be able to use Crystal Water to raise a hero's stats up to a certain limit, but you can raise that limit as you explore the Record Dungeons!

＊ The posted images and data are taken from the development phase, and may differ from the actual Relic Draw content.

Comments on this page(14)