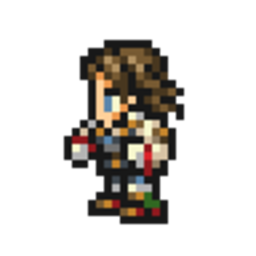 The fourth son of Emperor Gramis, and potential heir to the imperial throne. Though but twelve years of age, Larsa's grasp of politics and military strategy are uncanny. He has an earnest wish for peace, and he seeks to right the wrongs of the Empire, which sets him at odds with his beloved brother Vayne.

Healing Magic
Proficient with a variety of weapons and armor, with a focus on daggers and swords. Can use rare white magic abilities, buffing his Mind to cast potent healing magic, and supporting the party by managing their buffs and debuffs.

Comments on this page(6)