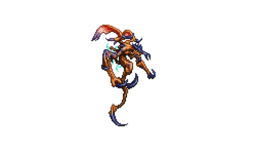 The Spectral Keeper is a powerful enemy who uses its Glyph Mine to instantly KO a hero, kupo! A countdown begins as soon as Glyph Mine is set, and if the count reaches zero, it's lights out! But if the character uses Defend when the countdown ends, they can avoid the KO, so it's crucial to time that Defend right, kupo! If the Spectral Keeper hits a hero with Berserk Tail, they'll go Berserk and won't be able to Defend, so bring Esuna to calm them down! The Spectral Keeper doesn't have any weaknesses, so use Armor Break to lower its Defense, kupo!