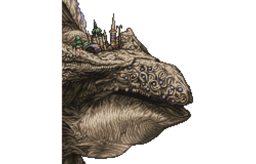 Melee attacks won't be able to reach Sin's Head until its HP drops low enough, so you'll have to start off with ranged and magic attacks, kupo! After a certain number of turns pass, Sin unleashes Giga-Graviton, which can KO your entire party, kupo, so use abilities like Haste to defeat it before that happens! It's resistant to break debuffs, but Armor Break and Mental Break can weaken it enough to help, too. In addition to the group magic non-elemental attack Gaze, Sin also has Confuse Gaze and Stone Gaze, which can Confuse and Petrify single heroes, so bring abilities like Esuna for some relief. Note that it's also immune to break debuffs that affect Attack and Magic, kupo!